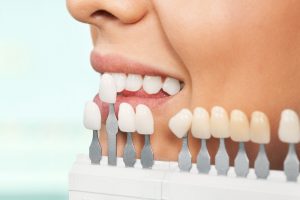 Hydrogen peroxide is one of those household items that everybody keeps in their cabinet. It’s easily recognized by its brown bottle, which makes it stand out in a sea of stockpiled comet cleaning powder and rubbing alcohol.

Hydrogen peroxide is one of those things that we see and use often. Its versatility makes it great for a lot of things, from cleaning cuts to cleaning upholstery and bleaching hair. Some people even use it to de-yellow their toenails. But should you use it to de-yellow your teeth?

How Does Hydrogen Peroxide Work?

Hydrogen peroxide, chemically expressed as H2O2, is such a highly effective compound, because it oxidizes the second it touches air.

While the oxidation that takes place makes it effective to kill bacteria, it also damages the cell wall and most materials it touches. This makes hydrogen peroxide a pretty aggressive chemical.

Nonetheless, a lot of in-office and at-home treatments use peroxide based agent, carbamide peroxide, to whiten teeth. Carbamide peroxide whitens teeth by breaking down into hydrogen peroxide and urea, which works as an acid to lift up stains in the teeth.

You’re probably thinking “isn’t acid what causes cavities? This can’t be good for your teeth. I might as well pour soda in my cavity.” Don’t be deterred from whitening products, yet.

Most whiteners you get from CVS or that we use in-office only contain about 10% carbamide peroxide. The American Dental Association gives a thumbs up to whiteners with up to 10% peroxide concentrations. Any higher than 10%, and you’re at-risk for destroying your precious enamel.

What About the Brown Bottle Stuff?

You might know someone who swishes with the brown bottled store bought hydrogen peroxide that we discussed earlier. For the past 60 years or so, swishing with hydrogen peroxide has been a “whitening fad” in oral health regimens.

However, using low-dose peroxide or high concentrations for a long time can inflame your gums, tongue, and the roof of your mouth. Not to mention, swallowing hydrogen peroxide can wreck your esophagus and damage your internal organs.

And here’s the thing, hydrogen peroxide in the brown bottle doesn’t even whiten your teeth. It might kill off some periodontal bacteria, but it also sets the natural flora in your mouth off kilter. Because hydrogen peroxide is an oxidant, it damages your cells, so why risk it?

If you want the whitening and oxidizing effects of hydrogen peroxide, try getting a tooth paste with a peroxide mixture in it. Your best bet is spending a few extra bucks on peroxide containing mixtures that are made specifically for whitening your teeth. ADA approved teeth whitening kits will contain a healthy amount of carbamide peroxide that are proven to keep your enamel healthy.

If you really want an effective whitening treatment, come into Dental Smiles at Dacula for a professional tooth whitening.

Not to mention, after your in-office treatment, you’ll receive an easy to use a take home kit that’ll help you maintain your pearly whites and keep them sparkling for as long as possible. Beyond the gentleness of the treatment, it’s proven to whiten your teeth 7 times in only 30 minutes. It also integrates fluoride, ensuring your teeth stay mineralized throughout the treatment.

Font Resize
Contrast
Accessibility by WAH
Call Us Text Us